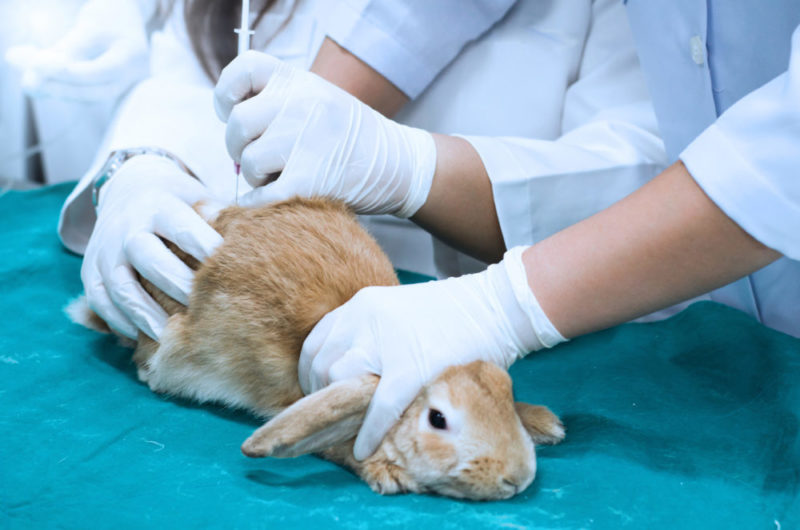 While most of us were busy ringing in the New Year at midnight on January 1, three states were quietly making national and international headlines, ushering in a new – and more compassionate – chapter of U.S. history. At that moment, California, Nevada and Illinois became the first three states in the country to ban the sale of new cosmetic products tested on animals, a move that sets a clear path for others to follow.
While these are just the first states of the U.S. to initiate such a ban, more than 30 countries worldwide prohibit the sale of new cosmetics and personal care products that have used animal testing. So far, the U.S. has lagged behind in implementing a national ban on animal testing for the cosmetics industry, but these three states are a clear indication that such a law could be on the horizon.

The move to cruelty-free

The cosmetics industry is huge, with worldwide sales valued at more than $530 billion – and that number is expected to just keep growing larger. The problem is, a lot of those products are tested on live, caged animals, resulting in pain and suffering that lasts for the remainder of the animals’ brief lives.
In animal testing, caustic, chemical-laden products are dripped into rabbits’ eyes or spread on shaved skin, where they cause painful sores and lesions. While manufacturers are legally obligated to ensure their products are safe for human use, there are no requirements mandating testing on live animals. The type of testing that’s used is by and large left to the discretion of the cosmetic manufacturers. For years, rabbits, guinea pigs and other animals have provided a cheap and convenient testing model for manufacturers and independent labs. By passing these new laws, the U.S. joins the international community in recognizing and eliminating cruel lab-testing practices, replacing them with humane options that are just as accurate and effective – and that do not rely on live animals.
The Humane Society of the United States issued a statement hailing the new legislation, pointing to an alternative testing method as a way to promote innovation moving forward. “With thousands of ingredients having a history of safe use and an increasing number of non-animal test methods available to provide data more relevant to humans, often in less time and at a lower cost, companies can still create new and innovative cosmetics without any additional animal testing,” said Kitty Block, president and CEO of the society.

In vitro testing: Good for animals, good for humans

In vitro testing uses tissue samples or other methods to perform complex tests that can yield the same or better results in terms of accuracy and efficacy, without significant (or any) cost increases. Today, there are many different types of in vitro testing available, enabling manufacturers and independent labs to perform the same types of services for maximum confidence in the products they produce. Many in vitro tests use human tissue samples or other methods, providing far greater accuracy than most animal models, where results may not be easily “translated” from, say, a rabbit to actual human use.
Introduced by state Senator Linda Holmes, the new Illinois law prohibits cosmetics manufacturers from selling any new products in the state that have been tested on animals, and levies fines starting at $5,000. The law applies to any new products manufactured after January 1, the date the law officially went into effect.
In a statement issued following the law’s passage last year, Sen. Holmes noted that consumers are demanding products produced in a cruelty-free environment, adding that many large manufacturers are changing their practices to accommodate that trend.
“There are alternative testing methods that are good for business, safe for consumers and certainly move us forward to a humane approach by eliminating the cruel practices of the past,” she noted.
At InVitro International, we’re committed to helping companies implement cruelty-free testing practices with Irritection® and Corrositex®, two in vitro testing methods that don’t rely on live animal models. In addition, we can help manufacturers of all sizes improve their testing practices without increasing in-house lab tests with our own state-of-the-art testing services, performed using our patented methods. To learn more about the products and services we offer, or to find out how we can help your company implement in vitro testing, contact us at 800-246-8487 or use our online form to get in touch today.